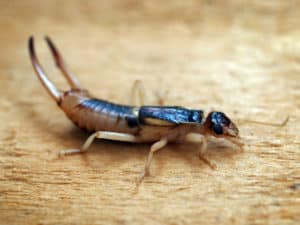 As you sleep all buttoned up in your bed, teddy bear under arm and ocean noises on the air, a demon is lurking around the corner in Maryville TN seeking out an ear canal to access your medulla oblongata.  As it creeps into your ear is salivates over the odor of your brain. It is hungry, and it’s not a zombie but your brains are on the menu. Except that this story is 100% poppy-cock, balderdash, bologna. For a long time the earwig has been feared because of an old wives tale. Are they dangerous? can they pinch you? 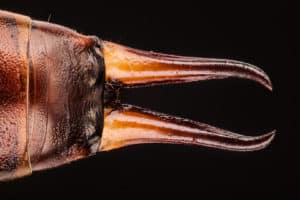 The earwig is an odd little arthropod with what looks like evil pincers on its rear. These are not usually used as defensive weapons as they feed primarily on plants and mold although they have been known to eat other insects as well. They are not poisonous, or more accurately, venomous. They do not drill into your brain to lay eggs or chase you around to sting you. These appendages are called cerci and are used to mate and fight. Yep, those pincers you were terrified of are the earwigs fun-parts. The male uses them to caress the female to get her in the mood. The males usually have much larger cerci that curve out more dramatically. The female cerci are straight and usually kept together. I could make some jokes here paralleling us humans but I will leave that to you and your personal level of demented humor. I have tried to get them to pinch me to prove the fear is unwarranted. Most of the time they won’t but even when they do the cerci often bend because they are not hard like horns.

Another thing that makes these odd creatures is the mothers care for the eggs. She licks them daily to prevent damage from fungi till they hatch. The young earwigs even stay in the nest till they have molted several times and continue to be looked after by the mother for a while after that. Most insects lay eggs and leave them to fend for themselves. They can be very numerous if you go looking for them. Many times I have opened an electrical box or cable box only to find an apocalypse of earwigs inside. They have even been known to short out electrical units on A.C. systems because they were packed in there so tight.

Earwigs love to hang out under rocks, wood, and other refuse sitting on the ground. They also love to get into any crack they can find in your home. Just like any insect they require food water and shelter. If you provide them with this they will hang around scaring people. Add moisture to that crack and they will be happy as can be feeding off of the growing mold. It is our fault when we see a bunch of earwigs because we have created an habitat the earwig simply can’t resist. If you have these creatures, give us a call to get rid of them.