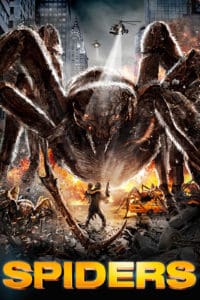 And now for something completely different. No Maryville pest control tips or Knoxville pest control stories today. How about a series of blogs about bug movies. Does that bug you? Sometimes we have to step back and not be so serious. I have surprised you, scared you, and grossed you out in the past here so lets have some fun with these. In full disclosure I am no professional movie critic. I’m just a fan. And a bug geek.

Spiders 3D is a movie I liked. When I started this I expected to have to sit through a bunch of bad B movies for your entertainment but this one surprised me. This is treated as a serious horror movie without the campy and using real world concepts.  A Russian satellite (it’s always the Russians with these movies) falls to New York with genetically altered spider/alien DNA. OK, so that’s a little silly but they were altering them to use the spider silk to make bullet proof armor. This is a real thing believe it or not. CLICK HERE.

So as you can imagine, the alien spiders are larger than their domestic cousins and they begin to hatch and terrorize the people of New York causing the military to roll in along with the secret group responsible who of course wants to salvage their secret project. In the midst of all the chaos the story focuses on 2 parents searching for their daughter and trying to get her out of the fake quarantine zone created to hide the government conspiracy.  One thing that bugs me is the queen spider. Spiders don’t have queens but I guess that’s the bug geek

coming out in me. Anyway, as you can imagine, the “queen” spider is laying eggs everywhere and her children are ramping up the body count while the queen who is massive takes thousands of rounds from machine guns, a mini-gun, RPGs, tanks, and a helicopter! Conceptually ridiculous but makes for a good monster movie with all the guns and explosions. That makes this old Marine smile.

One thing they got right was the depiction of the spinnerets when they shot webs to immobilize the prey. Kudos to the responsible party who obviously did some research, or at least watched a youtube video. What drives me crazy is the use of the backpack mister to apply a pesticide foam to kill the spider monsters. This is absolutely silly, I guess you only watched 1 video and couldn’t be pained to research how they actually worked. That truly bugged me kinda like almost any depiction of an exterminator where he is in an orange or dirty jumpsuit with rubber gloves to his elbows, a gas mask, and dual tanks on his back labeled with massive skull & crossbones on the side. This total misrepresentation [sigh], is redeemed in the finale with the queen spider squished by a subway train in a fiery death. Yes!  This movie is much better than most in the genera by taking itself serious with real world concepts…kinda. Rotten Tomatoes gave it a 1/5, IMDB a 3.4/10. Phoenix says 3 out of 5 spiders. And isn’t that the important one?

If you have giant mutated alien spiders, call the Marines, if you have the small domestic kind I can fix that.