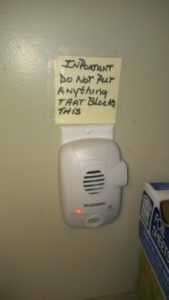 I see these all the time and they are often followed up by “I bought this and it is keeping the roaches away.” I promise you, if I am treating your home, any pest reduction has nothing to do with these devices.

Electronic pest control devices (so called “pest repellers”) come in several types. Some claim to repel insects, spiders, and rodents by ultrasonic, or very high pitched, sound. Others claim to produce an electromagnetic field that is repellent while newer devices add ionic air cleaning. Typically the small devices are plugged directly into electric wall outlets or through an adapter cord. To save you some time if you don’t want to read further, these devices are worthless. I even find German Roaches nesting behind these because they are warm. I’ll deal with why people believe these type of things work in another post. HERE

“Various devices on the market claim to repel bugs and/or rodents with ultrasonic or electronic (electro-magnetic) energy. These devices have, however, not been thoroughly tested and in fact have failed to do what they claim to do in the few scientific trials that have been done.”  Jack DeAngelis, PhD

“None of these devices have been scientifically shown to do what they claim they do. I would love to recommend these as a safe alternative to indoor pesticides if they worked — but, I can’t. And, in 2001 the FTC warned manufactures and retailers that claims of efficacy must be backed by scientific data.”   OSU Ext. Entomologist (ret.)

The bottom line is that if manufacturers have scientific data that demonstrate that these devices work they should make it easily available, but of course they don’t. Instead, testimonials are the only evidence of efficacy they offer. Testimonial data, such as “I tried it and it worked great!”, is not reliable because it is highly subject to the placebo effect which, in the simplest terms, is what happens when people see what they want to see. To be credible the claims must be backed up with proper scientific data.  An even dirtier trick these companies play is to review their own products under false user names. They also use form and formatting on their websites that matches the review sites. Less informed users may mistake these for legitimate reviews rather than clever marketing.

Manufacturers may argue that there is no evidence that the devices don’t work. This is only partly true but only because neither I nor anyone else can prove a negative. However it is the complete absence of published, scientific data that is most striking. I have not been able to find even one positive test result that has been published in a scientific journal. It is the responsibility of manufacturers to provide credible data that the devices they sell actually work. Otherwise, their unsupported claims are no better than “snake oil”. Check their literature and you’ll not find credible, published evidence of scientific testing.  In 2002 a study was conducted at Kansas State University that tested a commercial ultrasonic device against reproduction in the Indian meal moth. The study found that moths enclosed in a chamber and subjected to high (94 dB) ultrasonic sound produced fewer sperm (in males), fewer larvae, and the larvae weighed less. While these results are interesting I don’t think they tell us much about how the devices perform under real world situations. High levels of ultrasonic sound may act as a sort of birth control for moths, at least under these artificial conditions. Whether or not this would result in useful pest management remains to be tested. Part of the problem is the effects, if any, reduce the further the insect is from the unit which is plugged into an outlet far from where the bugs actually hide.

In another article published in 2006 by the same researchers who conducted the 2002 at KSU they tested the ultrasonic devices for repellency against German Cockroaches. In short, the devices failed to show any repellency and they concluded that the devices would not be useful for pest management of cockroaches. LivingwithBugs .com

Let me bottom line this for you. I don’t care what Aunt Joline says, these are pure scam junk. They started out on infomercials then moved to cheap catalogs and dollar stores. Somehow they can now be found at retail stores everywhere.  Don’t be duped into this. Even the larger models claiming to repel wildlife only work for a very short time. Mammals are very different from insects.  I can’t tell you how many times I have pulled one of these off the wall only to find roaches nesting on the back. When you are ready for real solutions, give us a call.