Most people my age remember recording movies off of TV with the new technology called VCRs. We watched them over and over and those edited TV versions are how we remember them. This was the case for The Fly for me. George Langelaan wrote the short story The Fly for Playboy in 1957 which hatched the 1958 movie which I also love. My childhood memory however, is from the 1986 version directed and written by David Cronenberg who also plays a doctor. He is also responsible for Naked Lunch, another bug movie.

Seth Brundle (Jeff Goldblum) is a mad scientist of sorts working on teleportation who lures Veronica Quaife (Gina Davis) to his lab with the promise of changing the world. He shows off his creation but insists she doesn’t publish his work. They end up getting involved but what Seth doesn’t know is that her publisher who sent her out to find the story is an old boyfriend. The problem with the device is it can only teleport inanimate objects. He tries a baboon and a steak but fails. Veronica gives him the idea that the computer cannot understand living flesh so he goes back to work reprogramming it. 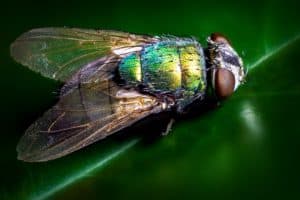 Photo by Luca Huter on Unsplash

After finding out about the past relationship with the publisher, Seth gets drunk and decides to try to teleport himself. Unbeknownst to him a house fly gets in the pod with him which is plausible. We would be horrified if we knew how many bugs come and go around us that we never see. Everything seems to be ok at first but this is a movie, you know it is going to go bad. He starts by exihbiting amazing strength and virility. It increases over time and supercharges his libido as well. As Veronica grows concerned, that leads to him trying to force her to teleport so they can share his newfound youth. She refuses and he throws her out. His troubling response finds him in a bar arm wrestling to take a girl home where his strength breaks the other mans arm. Taking the girl home she shows off his invention amid a romp in the sheets. But his true intention is to have her be teleported so he can have a partner matching his new traits. Veronica busts in worried as he is trying to force his new girl through.

Veronica removed some new hairs off of Seth and had them analyzed to which they came back not human. He deteriorates further loosing body parts as he transforms into a fly. He even has to learn how to eat like a fly by vomiting on his food and sucking the liquid result up. This is pretty accurate to real flies. Flies have a mouth called a proboscis kinda like a straw but no teeth. They puke, or more accurately, drool on the food and use the proboscis to suck up the liquefied contents. So remember that at your next picnic when the flies are on the potato salad. When they do this they also regurgitate parts of other food they already ate. You can see why they can be such a health hazard. Remember, they were munching on your dogs poop before finding grandmas potato salad. This is how they spread up to 65 different diseases. Yuck! 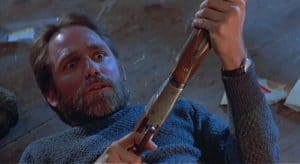 As his body deteriorates he theorizes that the fly is stronger than the human so teleporting through with another human will reverse the atrocity he is becoming. The horrifying twist is that Veronica ends up pregnant with what we can only assume is a human fly hybrid maggot sort of thing so she goes to have it aborted but not before Brundlefly ( how Seth is referring to his hybrid self now) overhears what is about to happen. He kidnaps her from the doctors office to take her back to his lab. Here in the final scenes he fights the old boyfriend by puking on his hand which melts away to a bloody mess. Stomach acid is acid right? So is this plausible? Human stomach acid comprises .5%, that’s why our vomit doesn’t eat through the floor. Now obviously we can’t compare human to fly stomach acid but I would take a guess that this is not powerful enough to disintegrate a mans hand in seconds. Besides, I couldn’t find any research on the matter. Why would they research that anyway? For me of course! Don’t they know I have a silly blog to write? Anyway, the story ends with a shotgun to the head. Moral of the story? Don’t be the old lady who swallowed a fly.

I don’t know what would happen if I were spliced with fly DNA but I’m sure it wouldn’t go well. If you have a mad scientist transforming into a Brundlefly then give me a call, if pest control won’t fix it evidently a shotgun will. IMDB gave this a 7.5 while Rotten Tomatoes ranks 91%.

Phoenix gives The Fly a puking on my food 4 out of 5.