Ain’t no Fleas on me

Every year it seems that there are 1 or 2 pests that are more numerous than normal. There is no definitive way to predict which they will be each year. In 2017 it seems to be fleas and yellow Jackets in Blount and Knox Counties.  As much as I hate yellow jackets, let’s deal with the fleas today. 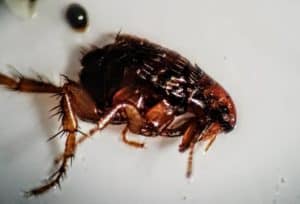 Fleas are small laterally flat insects that feed on blood. These are called ectoparasites. Of the 1900 species, 95% occur on animals and 5% on birds. Here in Knoxville and Maryville we deal mainly with the dog and cat fleas. Now just because it is called a dog flea does not mean it will only be found on a dog. It’s just a name. The cat flea(Ctenocephalides felis) is the most common of the 2 and will feed on cats, dogs, humans, and wildlife.

In 1 month a single female flea can produce 9000 eggs! She drops these eggs on the animal and they fall off into the carpet or yard. If no host is in the area they can lay dormant as an egg for 6 months waiting on a victim. This is why it seems that they came out of nowhere sometimes if the structure has been vacant. You move in and they all wake up because you rang the dinner bell. Even though the adult Fleas feed on the hosts blood, the larval stage can feed on dried blood from the host, adult flea feces, pet dander and even other flea eggs and larvae.

For most of us a flea bite is more annoying than dangerous but there are some who can have an allergic reaction and show severe welts. The flea has a siphon tube for a mouth that she pierces your skin with. Numbing agents and anticoagulants are used so you don’t feel the initial puncture and the blood flows freely. It is basically like puncturing the lid of your cup with a straw.  In fact the Order fleas belong to is Siphonaptera which means “sucking tube without wings”. Pretty gross, I know.

Because of this method of eating, they can transfer diseases. The main one we all remember from school is the Plague or Black Death from the 14 century in Europe that claimed 75 million lives. It  lives in rats but when fleas bit rats then bit humans they transferred the disease causing the chaos we know as the Black Death. Typhus, tapeworms, and skin irritation are also caused by a flea bite.

The most important step

The absolute most important part of getting rid of fleas even more so than a professional treatment is to treat the animals. You may see fleas in the yard or the carpet but they are living on the animal. If you don’t have pets you might have a rat, mouse, or wildlife problem. I have seen several this season that had an animal die in the walls or the crawl space that had fleas. With the animal dead the fleas will find something else to much on. Two recent customers moved the pet to the outside due to fleas and the population exploded. This happened because previously the animal was taking the brunt of the flea bites. With them removed from the interior of the house the humans were the only option left for dinner. 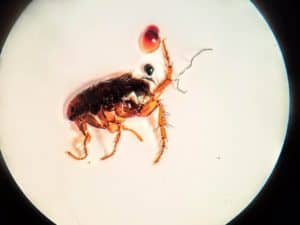 Fleas prefer the furry bodies of our pets because it is easier for them to stay hidden and protected. So even if you see them in the yard, treating the yard without treating the dog is like trying to empty the ocean with a teaspoon. You must begin with the source by treating the animal. I’ll let you and the vet decide how to do that but I will tell you my experience.  Most people think they have to go to the vet and buy the expensive flea treatments in order for it to work.  This is not necessarily true. I have seen the vet flea treatments fail 1000+ times. Now this could be because it wasn’t used correctly. Don’t overlook the cheap Wal-mart products. I had a cat that got out for a week and came back with fleas so bad they were walking over each other. The vet treatment had zero effect so I went and got the cheapest thing I could find at the grocery store and that licked it in no time. The conclusion is not that the cheap stuff is better. The conclusion is that every animal and situation is different. Bottom line, treat the animal first.  Follow the directions 100%. Do not double up to get results faster. Going off what the label tells you to do could harm your pet or at least cause it to not be effective. Besides, it is a violation of federal law to use a pesticide in any way other than what the label tells you to.

Bombing for anything is an absolute waste of time. 90% of the customers that call me for fleas have already tried. I’m not going to go into all the details here. I already tackled this subject in another post. you can find it  HERE.

Here is, I’m sure, what you really wanted to know. After you have treated the animal it is time to bring on death and destruction to the little vampires in your home so you can get back to your Netflix marathon or Bob Ross and his happy little trees. We do this by treating the floor with 2 types of products. The first kills the fleas outright. The 2nd is where the magic happens. Insect Growth Regulators or IGRs are used to break the flea life cycle. Guess what they do? Regulate growth, yes that’s right. You get a gold star.  IGRs prevent fleas from growing up to the next life cycle, effectively it is flea birth control. Adults are not usually killed by an IGR but the eggs they produce may not survive, become sterile and even physically deform their genitalia. The larva and pupa stages of a flea are unable  to grow to the next stage and either die naturally or from exposure to the first product. When this happens they can’t make more little fleas that bite you.  For the icing on top of the cake, IGRs wreak havoc by using hormones that humans and pets don’t have. This means it is safer for the environment, us, and the pets.

Before and after treatment you must vacuum the entire house. This removes live fleas, dead fleas, eggs, and flea fecal matter. It also has the effect of agitating the eggs to hatch out and become exposed to the treatment. In the egg stage it is very difficult to kill. In nature when the egg falls off the animal in the woods, that egg can stay dormant for 6 months if there is no food in the area. The vibrations of an animal in the area tell the egg when it is time to eat. Vacuum every day at least 1 time a day for 1 week. The more the merrier here. Employ the whole family and get it done 4 times a day if you can. This will only speed up the process of eliminating the fleas. Hopefully you have a canister type vacuum, otherwise you will need to buy a bunch of bags. Every time you vacuum, empty the container, double bag it and remove it from the house. Remember you just sucked up a bunch of boy and girl fleas and brought them together. Ill let you figure out what can happen next. Two weeks after the first treatment we will need to follow up with you and see how it is going. Sometimes a 2nd treatment is needed.

Treating the yard for fleas

One of the first questions I usually get asked is about treating the yard. Very rarely is it necessary to treat the yard for fleas but it can be done if needed. Remember the animal is the source, not the yard. The only exceptions to this is in extreme cases or when there are wildlife issues.  In 16 years I have only needed to treat 2-3 yards for fleas.

So good luck with your flea circus and if you need help just give us a call. A phone call, text, PM or even an inspection is FREE.  Phoenix Pest Control serves Knox and Blount counties in East Tennessee.